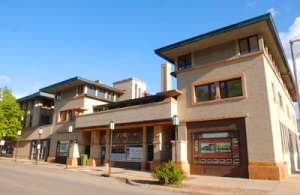 3:30 pm lecture:  “The Genius of Frank Lloyd Wright” by Master Storyteller Timothy Totten
5:00pm Pizza Dinner ($10 per person)
5:45pm lecture:  “Growing Up in a Frank Lloyd Wright House.” A multi-media presentation by Kim Bixler
6:30pm panel:  “Preserving a Masterpiece for the Future.”  Hear from a panel of experts including Wright homeowners and historical expert/curator.

“Genius of Frank Lloyd Wright”
Master storyteller Timothy Totten takes you on a whirlwind 75-minute tour of the life and work of America’s most famous architect, Frank Lloyd Wright.  With insightful architectural analysis, hundreds of photos and dozens of intimate stories, Totten weaves a tale of love, adultery, murder and the Emperor of Japan to illustrate the genius and personal foibles of the man the American Institute of Architects has called “The Greatest American Architect.”

“Restoring a Masterpiece: What it Takes to Save a Frank Lloyd Wright Building”
Join a panel of experts, which might include Wright homeowners, a restoration architect, a former Wright apprentice and a national Wright expert as they detail what it takes to restore a masterpiece by a daring and experimental genius of American architecture.  Moderated by Timothy Totten, the panel discussion will include time for audience questions.

Timothy Totten has studied Frank Lloyd Wright’s life and work for more than 25 years and visited more than 280 Wright structures around the country.  In addition to numerous storytelling sessions at schools, libraries and museums across the United States over the past five years, Totten has also co-produced two previous Wright symposiums and has four more in the works for 2017 at Wright sites including Florida Southern College and the E.E. Boynton House in Rochester, New York.  Totten is also the creator and volunteer race director for the non-profit Amazing Race for Charity, which has raised more than $70,000 in the past three years for charities in his hometown.  In addition, Totten is partner in a successful events company called FunVenture, LLC.

Kim Bixler is the author of Growing Up in a Frank Lloyd Wright House and can be seen in the PBS documentary Frank Lloyd Wright’s Boynton House:  The Next Hundred Years.  Kim Bixler’s family owned Wright’s prairie-style Edward E. Boynton house (1908) from 1977 to 1994.  She started giving tours when she was eight years old – sharing Wright’s architectural design details, revealing her favorite hiding spots and dodging the habitually leaky roof.  A graduate of Cornell University, Bixler has traveled the country giving lectures at numerous Wright sites including Taliesin West, Unity Temple, the Darwin Martin House, Florida Southern College, the Marin County Civic Center and the Hollyhock House.